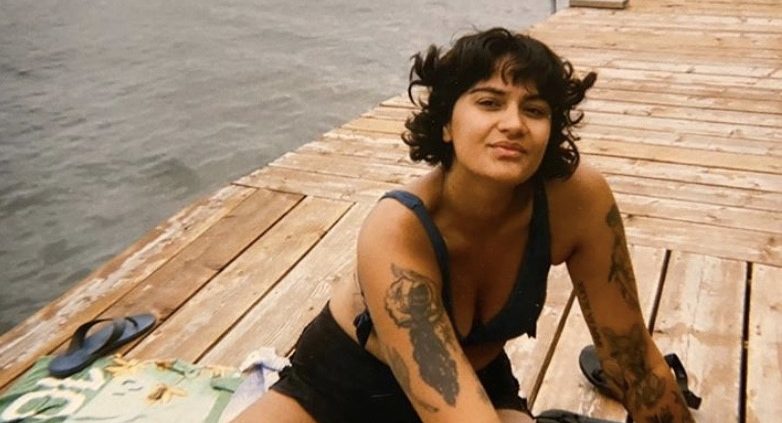 In 2012 I became a “legal adult.” Legal in the sense that I could vote, I could consume alcohol- far too much, too often, but that is customary for any fresh eighteen year old that I knew at the time. As my eighteenth birthday approached, so did my foray into nudity in a public forum.

My body was always a place of frustration and hurt and confused queerness. The anguish I felt towards my skin was somehow untranslatable into photos. Nude photos began first because of the validation from men I received, and then it was Tumblr that captivated my attention. It was 2012-2014 that I’d call the “golden years” of the platform. I was introduced to different bodies, different gender identities, sexualities that I’m not sure I was aware that I identified with at the time (but am comfortable in claiming these days), and a descent into the realm of BDSM.  Here was a platform that I connected with folks all over the world, and where I learned the most about sexuality in general. I was captivated by the women- and not only cis women. The naked bodies spoke to me like a new language I was starting to become fluent in. Many users in fact were sex educators, sex workers and adult film stars, which was an awakening for freshly eighteen year old me. The writings were special, and aided the conclusion that yeah, I was probably not straight.

I could play with folks virtually, I could explore, look at photos of naked women and accept a part of me that I had never properly acknowledged at this point. Through my “art nude” page I found comfort in speaking about sexuality. This encompassed self-pleasuring, speaking of one night stands, showing or speaking about marks left in sexual encounters. With each post I felt validated, and felt this genuine connection to fellow bloggers. (So much connection that I ended up being a bridesmaid of a Tumblr friend spring 2019). My connection to Tumblr fizzled when I moved overseas to “be free” for a couple of years. Though, the ideals that I had learned followed me and I let my interest in people other than cis men wash over me. I had often kissed my one friend when drunk many times when we were out at the bar, but never recognized that I enjoyed that because I liked women as well as men.

My two years went by, flirting and crushing with my friends, but never crossing the line for fear of ruining friendships, and also the idea of being rejected by a woman was far more devastating than the rejection of a man. It wasn’t until I was on my way home that I felt something for a fellow hostel mate. We hit it off immediately. We were in Florence, and spent time with another woman from our hostel. I knew I was headed to Switzerland shortly after Florence, and she invited me to stay with her. This was not uncommon amongst fellow travellers, but the excitement I felt to see her was hard for me to explain to myself. When the day finally came to stay with her, she met me in Bern where I had stayed and explored alone for the past two days. She and I walked around and she showed me things that she knew, we had dinner, and then we walked through a rose garden. I know- so cheesy, but I didn’t know if she felt the same romance I was feeling. All I wanted was to grab her hand and kiss her, but I had never had feelings of affection toward a woman. I had always known that women could turn me on, but didn’t know that I could crush.  So here we were, in a lovely romantic garden while the sun was setting and I couldn’t have been more jittery if I tried.

Nothing happened that night. We got on the train and rode to the city where she was from and I slept on her couch. She left for work in the morning and I explored the city alone, confused as to what the hell I was feeling. I was far too shy to admit it, so I was going to closet the feeling. When she came home from work we went to the lake, we swam and headed to a cocktail bar and had a couple drinks. I was set to leave the next morning, so I packed my bag, I showered after she showered and we sat and chatted. My body was tingling. I was so turned on by this woman, why couldn’t I admit it? She got up to go to bed and said, “Good Night Vee, I’m happy you came…” She trailed off and then said “Vee…. I would really like to kiss you, is that okay.” In my head the voices were squealing. Out loud I said “I want to kiss you too…”

We moved toward the bedroom where I translated what I loved in bed onto her skin. Touching her and kissing her everywhere. I learned the gratification in making someone with the same gender identity as me cum.  It was an exploration of her, and of myself as the waves of orgasm crashed into both of us. It was both of our first times with a woman, cis or otherwise. Our sexual encounter felt like falling in love, and I never claimed to be straight after that. We connected on a level I had only connected on once or twice with men of my past. I had always been turned on by women. In my youth I had masturbated to the movie “The Runaways,” “Black Swan,” and “Pirates of the Caribbean” to name a few, but never had translated lust to romance until that summer.

Since then my circle has seemingly become more queer (to use a broader word) and those folks have validated my sexuality even though I did marry a white cis men. Many of the, specifically women in my life are in this purgatory of queerness- where we are all with white cis men, many of us being women of colour, an added layer of confusion. It is a confusing identity to live with when folks see you as straight, but that is not the identity you relate to. None of us were seeking a man to be our partner(s), but somehow we all ended up them. We have all defined what it means to be queer, even though we are in these partnerships. Becoming close with other women who have the same experience has been extremely helpful in becoming comfortable in myself. We have taught each other that being with a man doesn’t negate the feelings we have had in the past, present or future- even though we aren’t visable.

During pride this year a close friend of mine who is a Lesbian wished me a “happy (what would have been) pride” and a “I’m so happy to be connected to a human life you” and that small text validation seemed like a signal that all the pushing away from my sexuality was, and is okay. Maybe the slow burn was necessary to learn the gravity in labelling myself as queer.

Intamo Pleasurables facilitates sex that feels better, by using plant-based ingredients that nourish your body and leave you feeling sensational. Our formulas are designed with intentional ingredients that promote pleasure and ease discomfort. Sex education is at the root of what we do — we continuously strive to empower all humans to own and embrace their sexuality, wherever it may be found on the rainbow.

Would you like to be the first to know about upcoming events, deals and new product drops? Join our email list and get 10% off your first order!

How to have More Sex in Long-Term Partnerships

I Interviewed My Friends About Sex On Antidepressants
Scroll to top