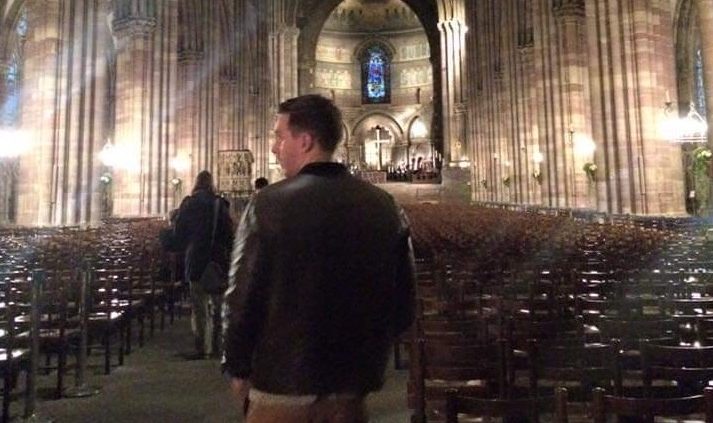 May 7th, 2020: I had been in Covid-lockdown for 2.5 months and had already decided that the time off from working would not be wasted time. I had rediscovered my creativity, had painted four rooms in my home, and had found solace in my friend-turned covid roommate. It was around nine in the morning when I said to my friend: “I think I’m going to send my ex a message…” With encouragement and many drafts, I sent a carefully worded message (an essay really) telling him about the night that he raped me.

Let me back up here. I was freshly moved “across the pond” living in London, UK. I was 20; full of adventure, hope, and excited at the prospect of newness. I love people and learning life stories, and truthfully the idea of meeting folks and getting to casually hook up with them was THRILLING. I spent a lot of time on Tinder in what I would call the “golden age” of the app. The city of eight million was quite literally toppling with people for me to meet; it was an endless river I could throw my line in and reel in bite…or two.

I met him in front of some tube station. He was tall, handsome, and French – really the end-all be-all for a twenty-year old from North America. (Oh…just me? Ok…). We started seeing each other and eventually he became my boyfriend.

We decided to stay together even though he had gotten into a Master’s program back in France. The first time I visited we met up in Paris. We got a hotel and walked around, ate delicious food, and sat in front of Notre Dame. One day on this short visit, I put an outfit on – a long sleeved cashmere sweater dress, some hose and a cute pair of boots. I was fully dressed and ready to have another day of walking the Parisian streets when he told me I couldn’t leave wearing what I was wearing. I asked “what do you mean?” and his reply was “you can’t wear that.” I considered myself a strong person growing up with strong women all around me, only hearing that I could do whatever I wanted as long as it was safe. I stood there rolling my eyes and saying “let’s go” because I looked cute. We didn’t go until I changed into something “less revealing – this is Paris, not London. You can’t dress like that here. Too many people will look at you, and talk to you.” Once we were out of the hotel I reminded him that that had been the exact same outfit that I had been wearing when we met.

This perhaps should’ve been the point when I said – “alright I’m definitely done with that behaviour,” but I didn’t. From there it became a slippery slope of being asked who my guy friends were, if I was cheating on him, and being shamed about looking pretty when I dressed up with friends. Here I was, now 21, having a blast with my friends in London – but the guilt from my boyfriend’s lack of trust was slowly eating away at me.

The next time I visited him was in Strasbourg – and surprisingly, it was fun! We laughed, walked around, sat by the canal drinking wine… it was like a dream. His flat was in the beautiful Petite France area so I was steps away from the gorgeous fairytale German meets French architecture.  I left feeling hopeful and like the stress of being long-distance was the cause for his jealousy and controlling behaviour. This trip had breathed life back into us; I was hopeful. I went into the next visit excited, not obligated.

It was one month before Christmas and the city was buzzing with holiday cheer. We went for dinner and came back to his flat. We started undressing and kissing but before I knew it, I was uncomfortable. I repeatedly said “stop” and my body went numb. All I could think was “why won’t he stop?” He finished and I rolled over onto my left side – quietly crying. He was talking and I wasn’t listening. He saw something funny on his phone that he tried to show me and I wouldn’t respond or look. He peered and rolled me over and noticed I was crying. He was so oblivious and that spurred him to ask “what’s wrong?” to which I replied “I said stop.” He looked as though I had slapped him. He mumbled a few things about how he thought that I just needed it slower or something and then boldly sad “I didn’t rape you.”

I didn’t rape you. Those four words latched onto me for years to come. The weeks following we pretended things were normal. Maybe he thought they were… I couldn’t properly conceptualise that my boyfriend – someone I loved and thought loved me, had taken my body as his own.  I stayed with him for a month and a half after that, floating. After we broke up I felt breath enter my lungs, replacing the water I hadn’t realised I had been drowning in for over a year.

My visa was days away from expiring, I’d had a wild European summer of adventure and it was time to move home that September. I’d made a vow that I wouldn’t date for all of 2016-just flings. October 19th I went on a first date with my now husband.

Flip back to last May. My husband is away for work, my pal is living with me- and I need closure. The thought of my ex just too obtuse or ignorant of the rape he perpetuated was sickening. I thought it was likely the former- he was just too stupid to realise that I was affected deeply by that moment. It took me many years to recognise this wasn’t only time he’d done this. I’d mostly healed from those experiences by speaking with the femmes in my life- 99% of whom had similar stories. The solidarity softened the hurt- but something was nagging at me. So I added him on Instagram. I sent a message and both my friend and I were buzzing with anxiety and anticipation, so we took a shot of tequila and waited.

This was the response I got (Keep in mind that he is ESL):

Hi anonymous, that is a long message and indeed a long time we did not talk.

I do not really know what to say about all that. Yes I remember well about Strasbourg when you came to see me and when we had a misunderstood and you cried. I am sincerely sorry about that and again I apologize. I also have to give you my point of view as now we are both older and mature. I think using the word “rape” make me feel very bad as it is very serious. I know myself, my values and I respect women. I would have never raped you and I never did, I will never do.

I agree, I did not hear clearly when you said stop or maybe on the moment I did not realize you really wanted to stop… In any case you were my girlfriend and I did not consider you as someone or a body that I own. We should have discussed more about that cause I see that it had a deep impact on you and I always wanted the best for you as I loved you. Yes when we broke up it hurt me as I had feelings for you but it’s life and life goes on. If you want to talk about all that on the phone, I remain open to talk. I’m sorry for what happened to you in the past. Your message makes me feel as a bad person which I think I am not and my relatives and friends would say the same.

Was it worth it for that response? Sure. I had already healed regardless of the lacklustre answer. I wanted to tell him for my own sake. It was the closure I needed.

Intamo Pleasurables facilitates sex that feels better, by using plant-based ingredients that nourish your body and leave you feeling sensational. Our formulas are designed with intentional ingredients that promote pleasure and ease discomfort. Sex education is at the root of what we do — we continuously strive to empower all humans to own and embrace their sexuality, wherever it may be found on the rainbow.

Would you like to be the first to know about upcoming events, deals and new product drops? Join our email list and get 10% off your first order!

5 Pro Tips to help Manage your Pelvic Pain (trust me, I have Endo)